Cayo Levantado (literally, ‘raised cay’ in English) is the Dominican Republic’s quintessential Caribbean oasis. Also known as Bacardi Island, because of it close resemblance to the beaches Bacardi Rum once used for their famous commercials, this sandy sanctuary is located off the southern shores of Samana Peninsula.

Although Cayo Levantado is normally related with Samana, the island is easily reachable, by boat, from Miches and several excursion companies run this tour year round, but especially during whale watching season. Cayo Levantado is world renowned for the thousands of humpback whales that visit every year from January to March. The World Wildlife Fund considers the Bay of Samana as one of the best places on earth to watch whales.

This palm-tree studded island boasts bone-white sands, lapping turquoise waters and picture-perfect views of the Samana mountains to the North and the Oriental Mountain Range to the South. Cayo Levantado was once known as Bannister Cay in honor of the infamous British pirate Jack Bannister who set up shop on Cayo’s virgin shores in the late 1600’s. Some 300 years later, half of the island is now home to Bahia Principe Cayo Levantado. This 200-room, five star luxury resort recently snagged the number nine slot in Tripadvisor’s survey of the top 25 all-inclusive resorts in the world.

The other half of the island is home to a lazy, tropical beach with shallow, transparent waters and, of course, a beach bar serving up Cayo Levantado’s famous mouth-watering piña coladas. These authentic piña coladas are served the only way a piña colada should be – in the actual pineapple! These impossibly fresh pineapples are brought from the Samana countryside and are filled with rich Dominican Rum; add a straw and a little umbrella and life cannot get much better. 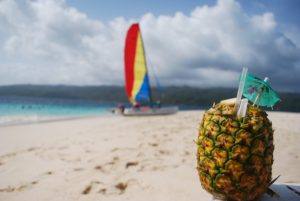 Cayo Levantado is also a popular destination for visitors staying in Punta Cana. Daily excursions from Punta Cana are offered by bus via Miches. Many excursions that visit Cayo Levantado are combined with a truck safari through Miches’ countryside to learn about and taste the region’s rich local produce: coconut, coffee, cocoa, mango, pineapple, sweet potato, banana, papaya, passion fruit and mamajuana (supposedly a natural aphrodisiac).

Cayo Levantado is one of the most coveted islands in the Dominican Republic. With powdery sands, azure waters, pirate history and luxury resorts rooms, most visitors find this photo-inspiring island the highlight of their vacation – especially with a Cayo Levantado Piña Colada in hand.

Contact us to find out how we can get you to Cayo Levantado!